Slowly catching up on unwatched Pixar films and I’ve finally got round to Monsters, Inc. What an ace film – funny monsters, incredibly cute children, a brilliant premise for a world (scaring kids to harness energy – who comes up with this stuff!? Genius!), an extended cast of ace characters (the giant slug receptionist – haha), lots of heartfelt moments and a great, final message (big spoiler coming): that kids actually produce more energy when they laugh rather than when they scream and cry. Who’d’ve known!? Naturally, this is an apt metaphor for the fossil fuel industry.

The monster economy is predicated on traumatising children. This, ultimately, is horrible – how tragic that for the monsters to thrive they must instil fear and suffering into the hearts of endless children. So too for our energy industry – fossil fuel extraction has always been dangerous and is increasingly so. For example, the extraction of oil in the Niger Delta has led to huge amounts of pollution, high levels of corruption within the Nigerian government and many human deaths – due both to poisoning and murder. Of course, we can’t just blame other countries and their governments for the problem. Companies like BP and Shell are notorious for colluding in and profiting from corruption. In Monsters, Inc. a typical fossil fuel company CEO is represented by the five-eyed humanoid crab Henry J. Waternoose III. 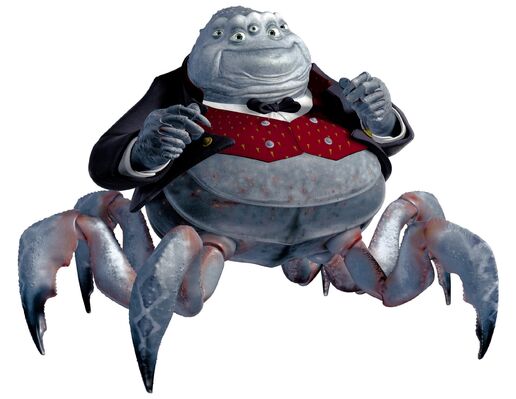 The company has been in Henry’s family for three generations and the pressure’s on for him to keep it running. Unfortunately, scream energy supplies are dwindling and Montropolis is experiencing frequent black outs. At first Henry appears harassed, proud but well-meaning until we discover he is colluding with one of his employees to use extreme-extraction techniques on children. So too for energy companies like BP as they’re forced to use more dangerous modes of extraction to get at lessening fossil fuel supplies. The Deepwater Horizon oil spillage of 2010 is a potent reminder of how dangerous this is – a BP owned rig exploded off the Gulf of Mexico killing 9 and causing untold levels of pollution. I was at a talk given by an ex-BP member of staff and they admitted that the reason it was a BP oil rig that exploded rather than one owned by another energy company was “bad luck” – yup, oil rigs are accidents waiting to happen because energy companies want energy fast to boost their profits now. They ride rough shod over health & safety and concerns for the environment and the results are tragic. Fortunately, Henry J. Waternoose III ends up in prison for his nefarious dealings (as should CEOs of dangerous energy companies, instead they get £14 million pay deals but at least the BP shareholders are making a fuss about Bob Dudley getting paid loads to trash the planet).

Meanwhile, James P. Sullivan is a big, blue, fury scarer. He’s the best scarer on the block having spent years terrifying children. However, when one kid gets into the monster world – an adorable little girl called Boo – James is forced to think twice. They become friends but there’s a moment when he accidentally scares her. Naturally, she cries. The moment is caught on camera and James has to come face to face with who he really is. He realises his whole life has been spent causing misery and harm, so he changes his mind and changes the company. He becomes the new boss of the company and sets it on a sustainable path – collecting laughs not screams. In rea life, the CEO Ray Anderson turned the textile company Interface around, from dirty to clean; John Browne once told us that BP would go Beyond Petroleum (although that all turned out to be spin and lies); and Charles Grant was a businessman who profited hugely from slavery but became a major advocate for its abolition. So, it’s possible, people can change and so can business.

So let Monsters, Inc. be a lesson to us, especially the heads of fossil fuel companies. Climate change is continuing unabated, the world is heating up and sinking. Weather is becoming increasingly unpredictable and extreme. And all the while societies are being picked apart at the seams and so much human misery is caused. We desperately need a few CEOs to step up and have some climate-based epiphanies. There are benign energy sources out there like that giant ball of molten fire in the sky for instance. If the monsters can do it, so can we, and here’s to a future of laughter, not screaming.