Mack the Knife is the psychopathic protagonist of Bertolt Brecht’s Threepenny Opera, now showing at the National Theatre in London. He’s misogynistic, greedy, ruthless arch-villain who is obsessed with money. Incidentally he has much in common with Donald Trump, currently doing the rounds in Trumpageddon at the King’s Head Theatre in Islington. One opera and a one-man show both painting bleak portraits of the world. The former a nihilistic, musical satire and the latter an ominous omen for things to come (but hopefully won’t).

The Threepenny Opera first. Wow. What a show. All singing, all dancing, with bits of set flying around the place, a band on stage, costumes to die for (and die in) and lots of jazzy smoke effects. It wasn’t quite Cabaret (but then again that’s a musical not an opera if we’re going to quibble) but Mack’s London is one of back stabbing, front stabbing and rape. It’s not a fun place to be and that’s the point. The joke’s on the audience as we’re mocked for wasting our cash on a show like this, a show full of low lifes and reprobates. Meanwhile, Brecht’s script does its best to ‘alienate’ us – “playing in such a way that the audience [is] hindered from simply identifying itself with the characters in the play. Acceptance or rejection of their actions and utterances [is] meant to take place on a conscious plane, instead of, as hitherto, in the audience’s subconscious” (Brecht). Yup, no sitting back and relaxing, instead we’re regularly reminded by the script that not only is this a play, what with characters shouting “scene change” and “interval”, but it’s also a visciously barbed reflection/refraction of the world we live in. Whilst that’s all well and good not being allowed to connect with the characters meant I didn’t really care what happened to them, especially Mack  as he was such an utter b*stard. It also didn’t help that Rory Kinnear, who plays Mack, couldn’t quite maintain his accent (was it meant to be Cockney or Russian or posh English?). 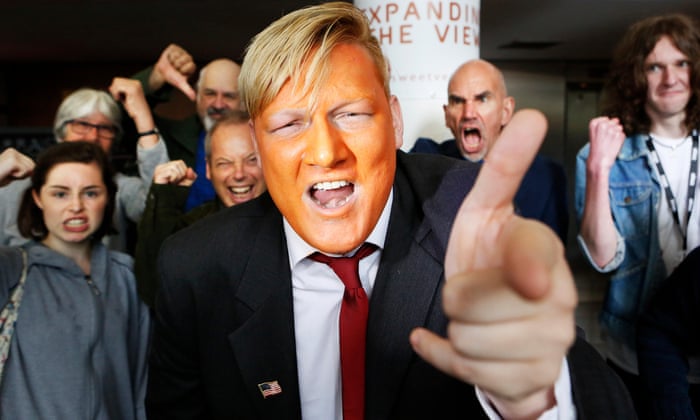 Someone who can maintain an accent is Simon Jay. His show Trumpegedden sold out at the Edinburgh Fringe and won many an accolade including an article in the Guardian and now it’s come down to London town. First I have to make a disclaimer: I know Simon (but I don’t know Kinnear) and think he’s a thoroughly good bloke but when I went to greet him before the show my arm was practically yanked off in a handshake from his orange faced, peroxide blond Trump. He was in character all night and it was terrifyingly brilliant. As he shoved his blond assistant around the stage, as he offended the audience, as he contradicted himself without qualm (often verbatim), so we were given a glimpse of an all too possible world should the real Trump win the vote in little over 50 days time! This will be a world of open hostility and violence that will be worse for women, the LGBTQIA community, people of the Muslim and Jewish faiths, people of colour and so many more. Basically anyone who isn’t white, male, American and rich. We’re fucking doomed if this guy wins and Mack’s dodgy London will appear a mere prelude to apocalypse. So share this new Avaaz thing to encourage US voters around the world to vote (even if they’re not in the US), go watch Simon’s play (next/last show Monday 19th September) and then swing by the NT if you fancy an opera (personally, I’d recommend Chicago).