“Children who need to be taught to respect traditional moral values are being taught that they have an inalienable right to be gay.”

Thatcher’s comments were applauded and the following year Section 28 was imposed, which prohibited the promotion of “homosexuality as a pretended family relationship” by UK local authorities. Officially, this meant state schools and public libraries couldn’t educate on LGBTQ+ lives and rights, nor support LGBTQ+ people. However, its reach stretched beyond the state sector and empowered other institutions, such as my private boarding school, to say nothing. Silence and neglect were my education and whenever I heard the word gay it was a slur. Section 28 was repealed in 2003 just around the time I was discovering an interest in guys.

Today, history is repeating itself as Conservative MPs such as Liz Truss (and most of the Tory PM candidates), journalists such as Janice Turner and famous novelists such as J.K. Rowling wage “culture war” on “Generation Woke”, reducing trans rights to a ‘debate’ and refusing to even acknowledge the existence of non-binary people. To this, I say bullshit. I’m older now and I don’t rely on my parents and teachers as I did as a child and adolescent, I can speak for myself. I will claim my inalienable right to be non-binary.

Trans rights are not a ‘debate’ they are human rights. Being non-binary isn’t about being ‘woke’, it’s about being a human. Fighting for my rights isn’t a ‘culture war’ it’s a fight for my fundamental right to exist. Just because I was born into an oppressively binaried system of gendering doesn’t mean I have to stay in it. For some this might mean expanding what it means to be male and female beyond the violent limitations of patriarchy. For me, it means stepping beyond the binary itself. I’m not strong because I’m male. I’m not kind because I’m in touch with my feminine side. I’m strong and kind because I’m human. I don’t oscillate between two poles of gender, i.e. male and female, I’m just me. And while I was profoundly shaped by my male upbringing it does not define me. It’s a part of me, absolutely, but it’s not all of me, and I’m excited to keep growing with the years.

The tactics of our oppressors are very familiar – bullying, neglect, abuse, ridicule, vilification – I recognise these from the playground. And I’ve survived them. I have every intention to survive them again despite the rising levels of transphobia in this country. I will meet their hate by loving myself and championing myself. I will meet their destruction by building a life for myself in which I am loved and championed for who I am. A world built of hate can only burn but a world built of love is beautiful and, after all, non-binary is beautiful. 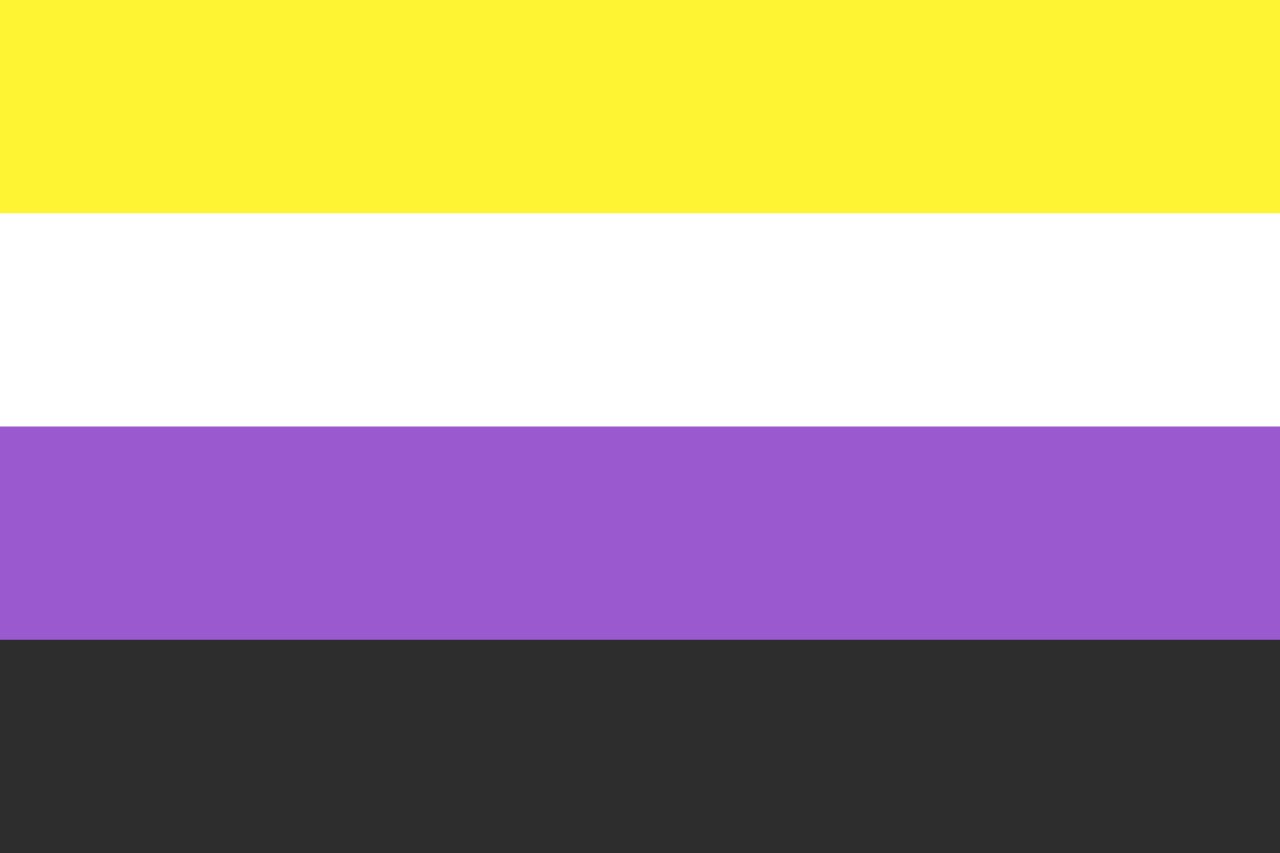 At my local swimming pool there are two changing rooms – male and female. I change in the male changing room. I do this because I am biologically male (not that I’ve ever had a test to confirm I have a Y chromosome) and because for the majority of my life I was identified as male (note, I am differentiating sex and gender). As a kid I was called a boy and from the age of 8 I was sent to all boys’ schools. There I was taught how to be a man, often tough but there was fun to be had as well. I became attached to these identities – boy and man – and it wasn’t until I was 26 that I learnt what the word cisgender meant. Over the years I started to lessen my attachment to the gender identity of male and explored the words trans and non-binary, as well as using they/them pronouns. Now, somewhere into my thirties I identify as all and none of the above. Such a large part of my gender history is male and he remains a huge part of me. He’s the dude that got me here after all, so kudos to him. I am trans because I don’t exclusively identify as the gender I was assigned at birth. I am non-binary because I believe gender is so much more than the binary of male and female. I am also none of these things because I’m just me, Robert. It is this person who takes his clothes off in the changing room and puts their swimming trunks on.

This is my gender journey and it’s unique, as are the experiences of every dude who gets his swimmers on in the changing room. And I want to use this post to make clear that, as far as I’m concerned, all men are welcome in my changing room. And to be even clearer, I’ll use the word mxn with an ‘x’ as I’m not just talking about biologically male people who identify as men. Trans and non-binary men are also welcome. And just because I’m a person with a penis doesn’t mean I expect everyone in the changing room to have a penis. I don’t actually care about their genitalia, I just want them to feel they belong in this changing space. I also don’t find it inherently dehumanising to be referred to as a person with a penis when it’s appropriate, however, this time around, regarding the changing room, having a penis isn’t of interest to me because I know there are men with vaginas and intersex genitalia. All I ask is that people treat each other respectfully.

I also want to be very clear that my changing room isn’t trying to erase men. If there’s someone who was born biologically male and identifies as a guy (like my 18 year-old self did, for example) then he is blooming welcome in the changing room as is a trans dude who has just had top surgery as well as the non-binary guy with breasts and the cis guy with breasts. However, I do recognise that many trans men will have experienced transphobia from cis men, so I’ll try and do my bit as an ally, and ensure the changing room is as safe a place as possible for all the mxn who use it. I’m not sure if any of this can be said of the actual changing room I use given there are no messages or codes of conduct which make clear it’s an inclusive and safer space.

I write this post partly as a response to some of the articles I’ve read by “gender critical” feminists. In one the author wrote that, asides trans women being a threat to women (apparently), she never heard of men having to make space for trans men. I know this isn’t true and here’s my post to prove it. Some GC feminists also deny the existence of gender identity and speak only of biological sex (well, they speak only of male and female biological sex and ignore the others) and in doing so they erase my identity as trans, non-binary and a man. They just want me to be a biological male with a biological penis…and might even want me sent for “conversion therapy” to ensure I man up. Gender critical feminists (aka terfs, aka transphobes) want to exclude me from society whereas all I want to exclude is transphobia (and sexism and racism and inequality etc). I can assure you that even though a lot of cis women are causing me considerable pain I will not weaponise that pain and throw it back at them. Add to that all the pain cis men have caused me whether it was bullying at school, homophobia at university or queerphobia since but, again, I’m not anti-men, I’m anti-abuse. I want a world in which people of all genders and sexes can be safe. All men and mxn, all women and womxn, and all people are welcome in Queertopia.