If there’s one thing Prime Ministers have known since Margaret Thatcher got Saatchi to do her advertising it’s that PR trumps politics. Tony Blair befriended Rupert Murdoch, promised us things could only get better then went about selling out Labour values and destroying Iraq. Gordon Brown was a bit of a non-event but David Cameron was all schmooze and no substance, the friendly face of a decidedly unfriendly party (he was so nice about gay people after all). Now Theresa May’s on the case and she really is positioning herself as woman of the people if her party conference speech is anything to go by. Of course, it’s not and we know it’s bullshit, she knows it’s bullshit (unless she’s deluded enough to believe it) and the rest will be the continual unravelling of the welfare state, increasing inequality, a fallback to xenophobia and darker times ahead. Seriously, do humans ever learn their lessons?

First she claimed Brexit was a “quiet revolution” during which the people had spoken and they could not be ignored. Remember the referendum?! It was a slim majority, not everyone voted or could vote and the whole reason it happened was because Cameron cocked up. And remember the last general election!? The Tories got a tiny majority and that was with David Cameron as leader, who promptly went about ignoring the people anyway. And who actually voted for May to be PM? Oh, no one. But being a Conservative revolutionary (yup, it’s an oxymoron) wasn’t enough for May. It seems she also wants to put off people from other countries from working and studying here. Remember Brexit!? Hasn’t Britain done enough already in telling the rest of the world to fuck off and scapegoating immigrants. Fortunately she wants us to be less selfish and individualistic, much like the triathlete Alistair Brownlee who gave up his chance to win so he could help his ailing brother over the line. Remember the job market!? It’s inherently competitive and actively discourages us from helping others. But she does want more state intervention in helping British people get jobs and claims the Tory party is the party of the NHS, of teachers, etc. Remember austerity?! That cut the welfare state and undermined the jobs of those who work within it. She then went on to tell big companies and big bosses not to avoid tax and do other nasty things. Remember the Tory Party!? These big bosses are the very people who fund it and the companies that benefit from the neoliberal policies it has promoted for decades. Finally, she reminded us that change is what people want and “a change is going to come.” Remember the laws of physics? Cause and effect, change always happens, it’s inevitable. But the implication was that the Tories have a plan and a well-thought through policy. Remember well-thought through Tory policies!? The big society, austerity, cutting the deficit. Um, none of those worked and the Tories just did what most governments do, ride out the booms and busts of capitalism and hope for an economic upturn come election time.

All together now: “I call bullshit!” She says she wants the Tory party to be the new party of the centre but can I remind you that the centre has never really existed. It’s a nice myth that perfectly polite middle class people want to believe: that somewhere between those mad socialists and crazy Ukips is a peaceful middle ground of politics where everyone can have their cake and eat it (well, not everyone, especially not poor people and poor foreigners). Capitalism, resting as it does on a military industrial complex, can never be peaceful and it can never be middling. But it seems May is choosing to ignore that and telling nice tales about fictional worlds where things end happily ever after. It’s called lying and politicians have done it for a long time. As for the rest of us, let’s be more like Alistair Brownlee, and give each other a helping hand because I really doubt the government is going to. 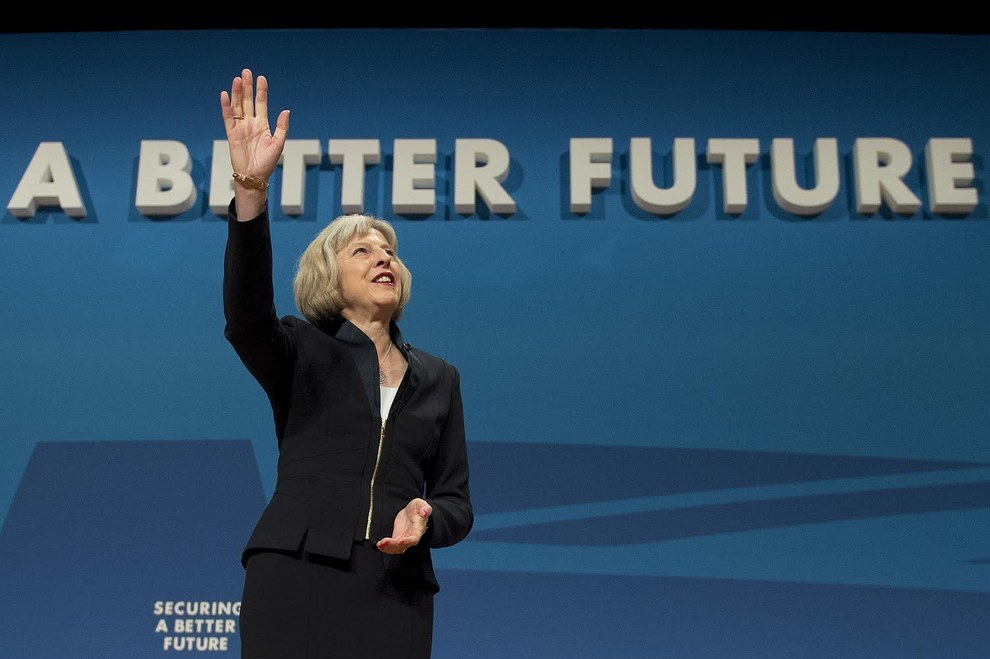